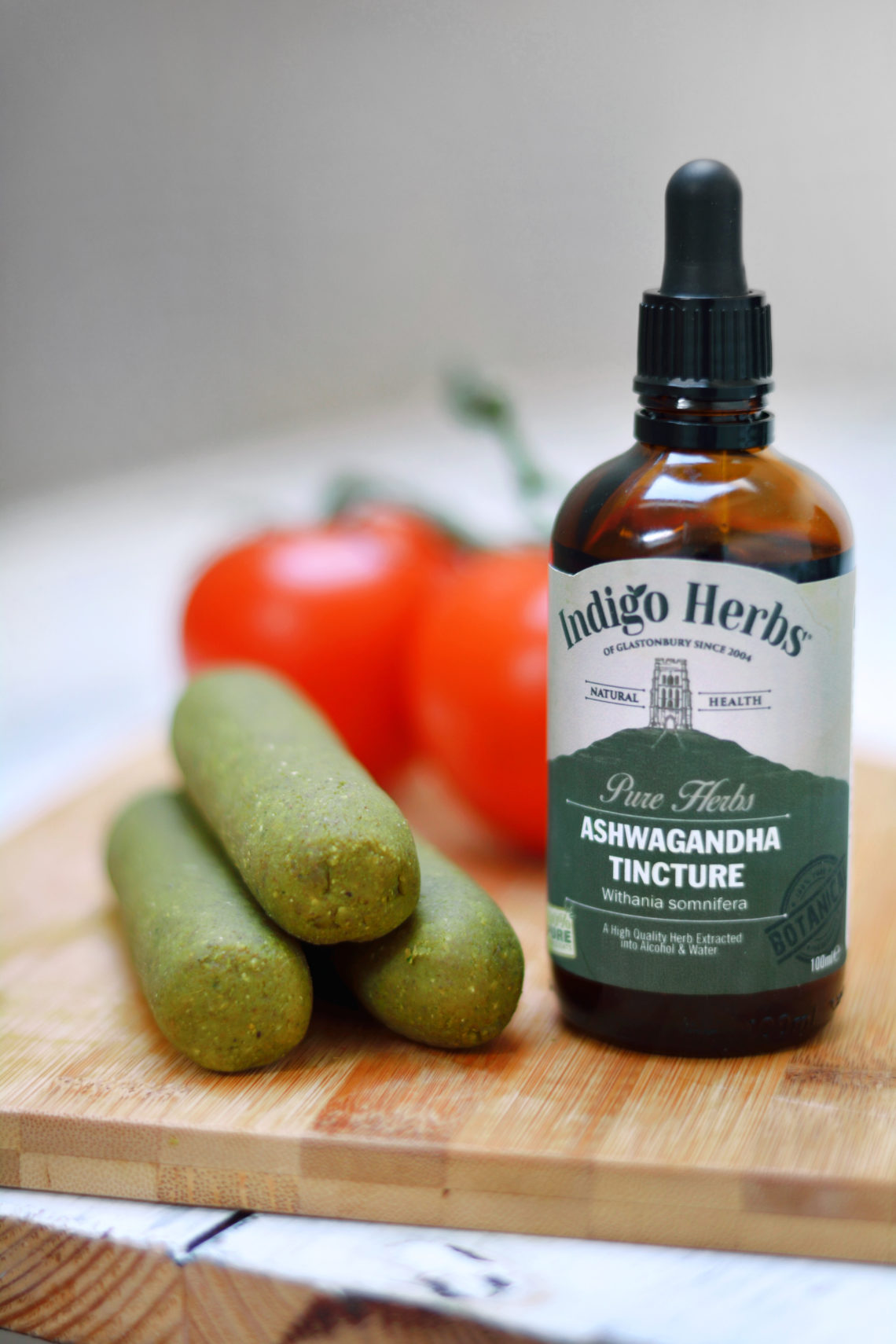 This is probably my first non-Paleo recipe on the blog – oh the shock! Having grown up vegetarian the bulk of my diet has stayed the same, just with a few Paleo adaptations. But, recently, my 14-year-old daughter decided to take the plunge into veganism and I am determined for her not to eat junk. Although it’s easy to get protein from seitan (gluten-flour), it isn’t exactly the healthiest option so I came up with these Adaptogenic Chickpea Vegan Sausages. Each sausage is packed with 6g of protein, a whole bunch of nutrients, and a shot of adaptogenic ashwagandha.

Disclaimer: Please note that this is a sponsored post. I was sent free products and compensated in return for an amazingly delicious recipe. Any payment I receive I use to purchase more ingredients and equipment to keep this blog up and running, and most importantly to keep creating quality content for you all. I am not an affiliate of Indigo Herbs and any purchases you make via them I will not be compensated for. I am not influenced by the company in any way and all opinions, ramblings, and thoughts are my own and 100% honest. If you’d like to know more, feel free to contact me.

“What the hell is ashwagandha?!” I hear you shout. Well, ashwagandha is a nifty little herb that helps to fight off oxidative stress.  It improves your overall resistance to both emotional and physical stress as well as boosting low libido and supporting healthy testosterone levels. It is also known to energise, improve mental clarity, and reduce anxiety. In the past, I’ve used ashwagandha in powder form and it has a very bitter and almost astringent, grass-like taste to it but I managed to acquire an amazing tincture from Indigo Herbs that is really palatable and pretty versatile too.

I’m not anti-vegan in any way, as you have probably noticed most of my recipes are actually vegan, but having an autoimmune disease I just can’t seem to sustain being vegan longer than a month or so without coming out of remission so I stay vegetarian with the odd bit of fish if I can feel my body starting to go that way. I’d really love to be vegan, mainly for ethical reasons, but it just isn’t worth sacrificing my health over.

I get really fed up of hearing people go on about how you can’t be vegan and healthy, but on the flip side, I’ve seen a lot of vegan bloggers failing to mention how important supplementation is, as well as eating many varieties of protein to ensure you’re getting all of the right nutrients into your body. That means eating beans, pulses, pseudo-grains, hemp, nuts, seeds, and a small amount of soy, tempeh, and seitan. 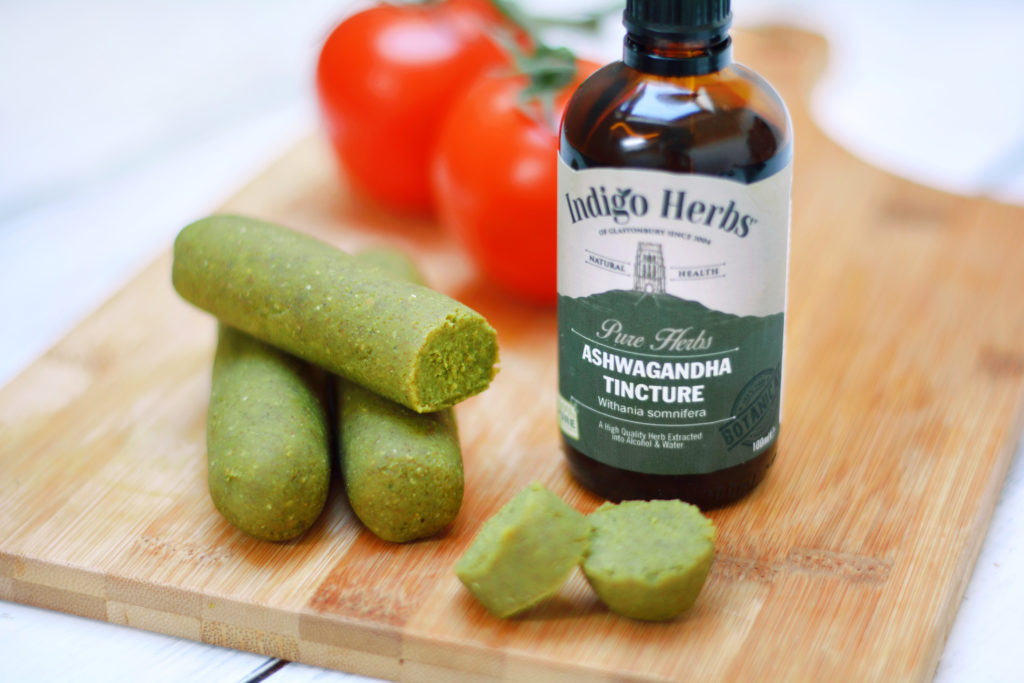 When it comes to supplementation grab a decent plant-based protein containing BCAAs and a mixture of pea and hemp protein, preferably bio-fermented and organic. Other useful supplements are spirulina, MSM, omegas, vitamins C, D, and B12. Even though I’m not vegan I still take all of these because my fish intake is very low.

These Adaptogenic Chickpea Vegan Sausages are herby and delicious. Packed with plenty of protein, healthy fats, and a shot of adaptogenic ashwagandha.

Initially, I had the idea to make a breakfast omelette using chickpea flour, but it was either too dense with a not so enjoyable texture, or basically a pancake. I decided to keep stirring the mixture over the heat until it had turned into a dough and roll it into sausage shapes. Thankfully it worked really well. Don’t be expecting chewy sausages when you bite into these bad boys. They’re more like flavoursome dumplings than sausages but they’re really comforting to eat with breakfast, and they’re super filling too.

I’ve played with the recipe about 6 times now – toying with differing ratios of chickpea flour to milled chia seeds. I’ve also tried not using any chia seeds and adding baking powder which resulted in a lighter and fluffier texture, without it just seemed too dense. I’ve tried pretty much everything and anything and I think that this is my favourite one by far. Either way, every version has gone down well with everyone at home. My daughter actually said they’re better than seitan!

When cooking the sausages only place them into the oven or the grill until warmed through and slightly crispy and dry on the outside. Although you can serve them right away and they are also perfect chopped into stews and salads. If you really don’t have time to make the mixture into sausages just simply pour the batter into a well-greased skillet, cook on low for 3 minutes then transfer to the grill and cook the top for a further 2-3 minutes until firm. Then just serve however you darn well feel like it.

Looking for more recipe inspiration using Indigo Herbs products and adaptogens? Why not try my Hormone Balancing Adaptogenic Activated Nut and Seed Butter or Red Velvet Freezer Fudge with Rhodiola? Oh, and if you want to keep up to date with my deliciousness then sign up for my newsletter and I’ll love you forever – who am I kidding? I already do! 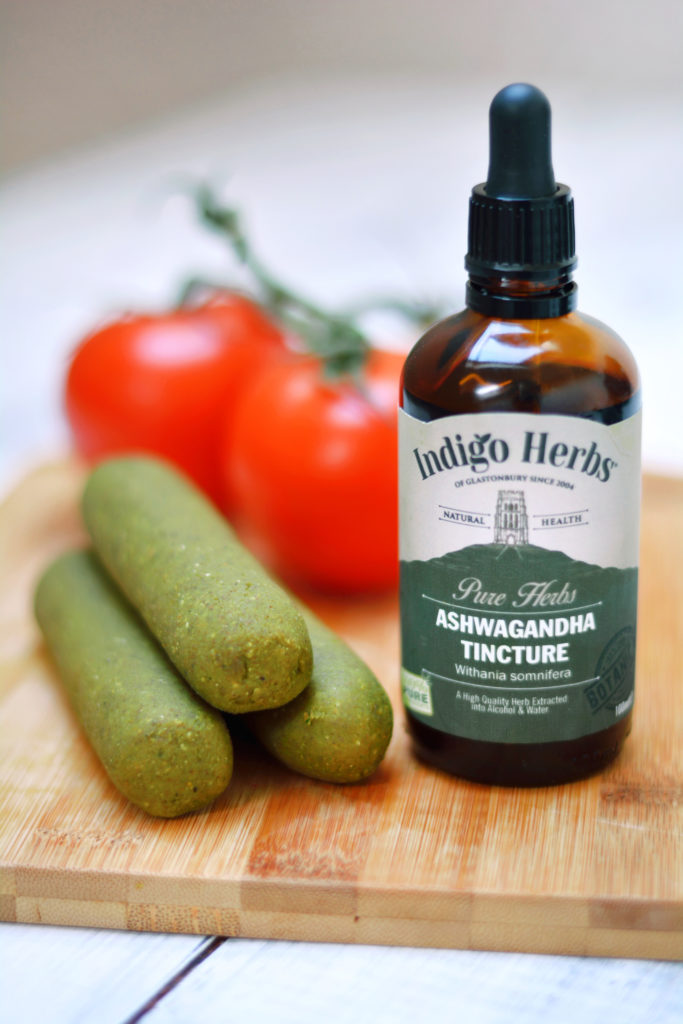 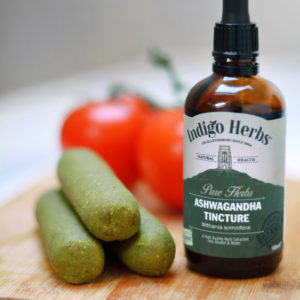 Save Print
Prep time
5 mins
Cook time
5 mins
Total time
10 mins
These Adaptogenic Chickpea Vegan Sausages are herby and delicious. Packed with plenty of protein, healthy fats, and a shot of adaptogenic ashwagandha.
Author: Greens of the Stone Age
Recipe type: Breakfast
Serves: 4
Ingredients
Instructions
Notes
* Please note that these sausages cannot be fried in a pan as they will soften rather than go crisp. Only heat under a grill. Store in an airtight container in the refrigerator for up to 3 days.
3.5.3251 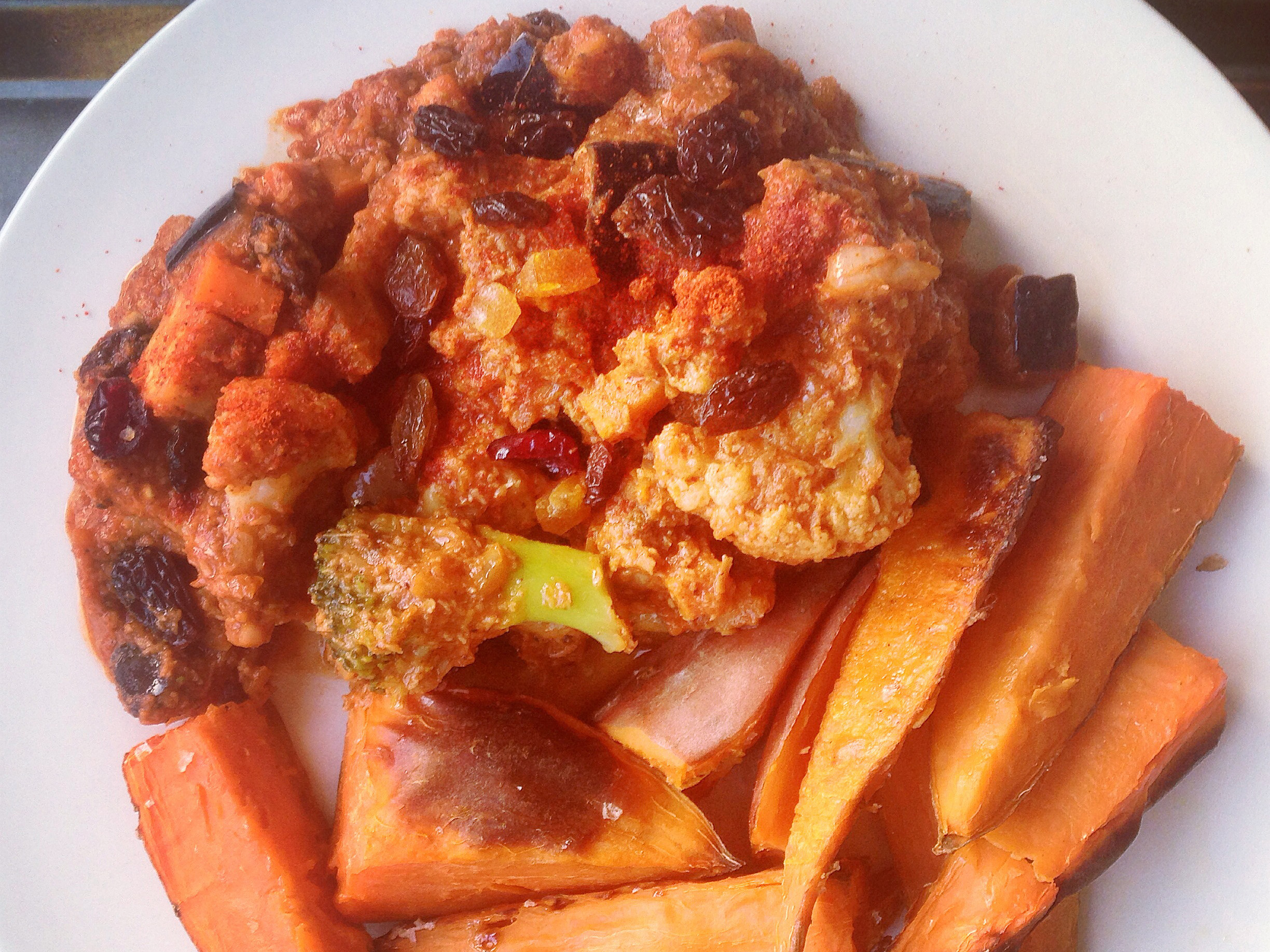 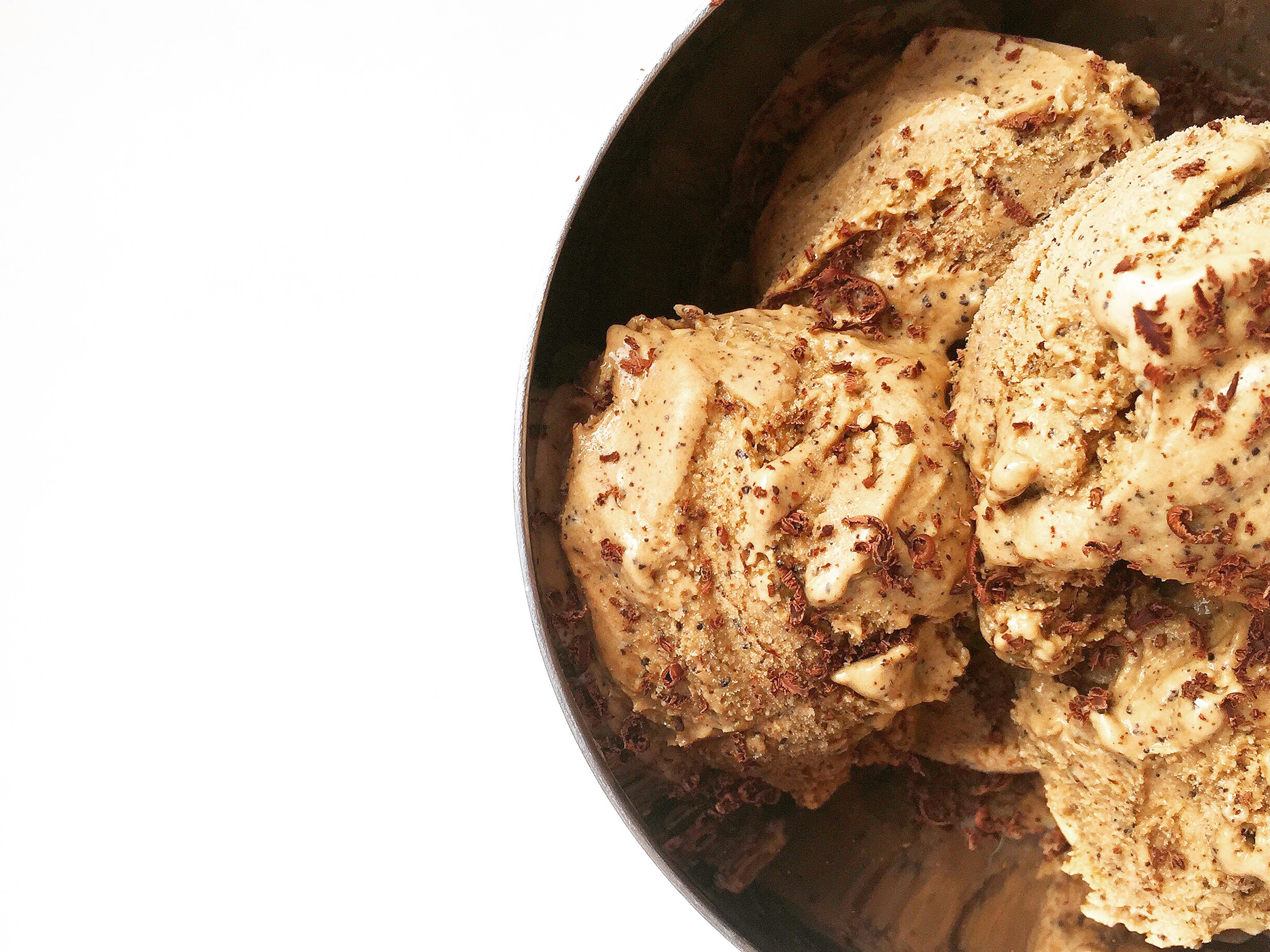 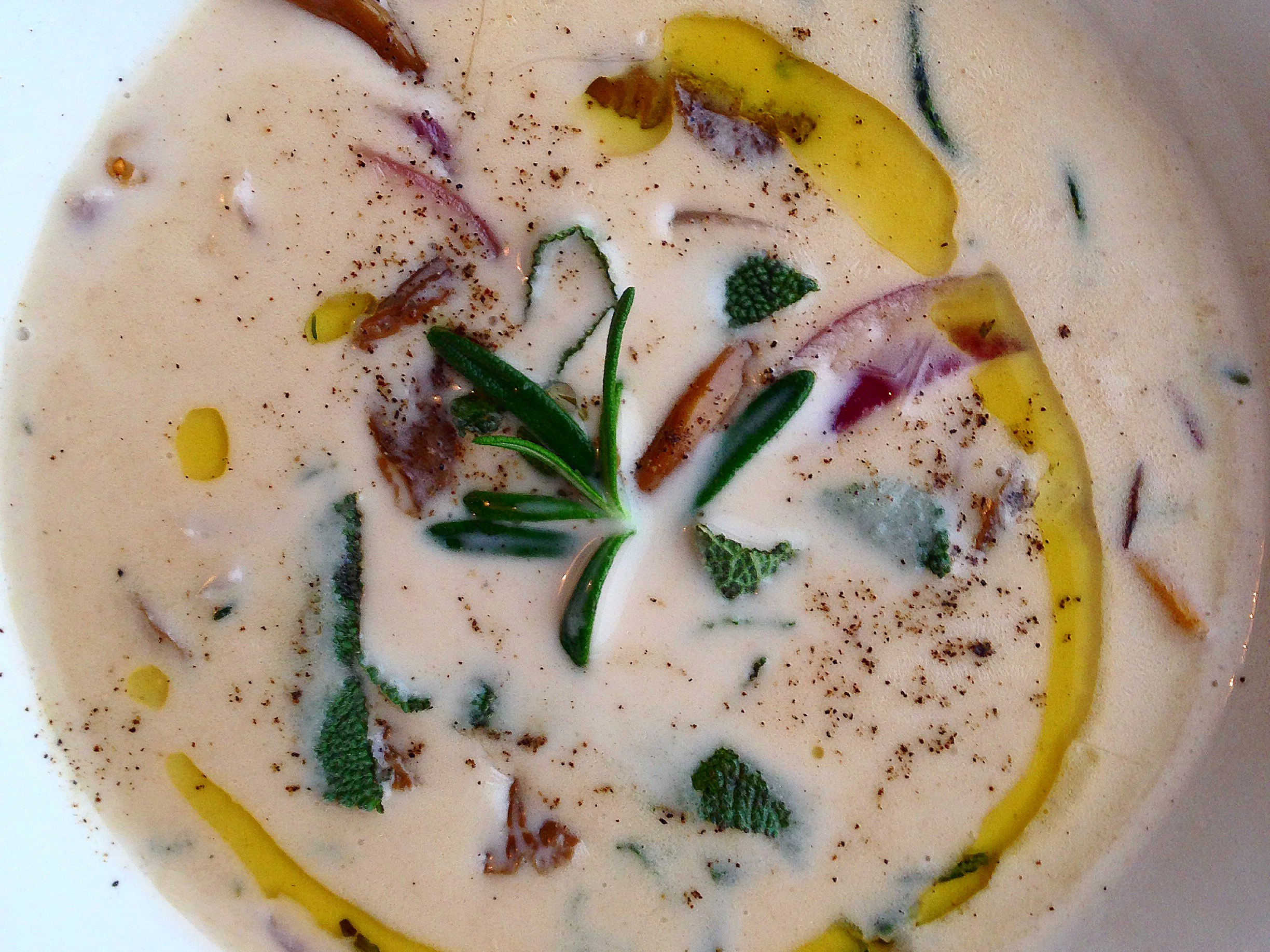