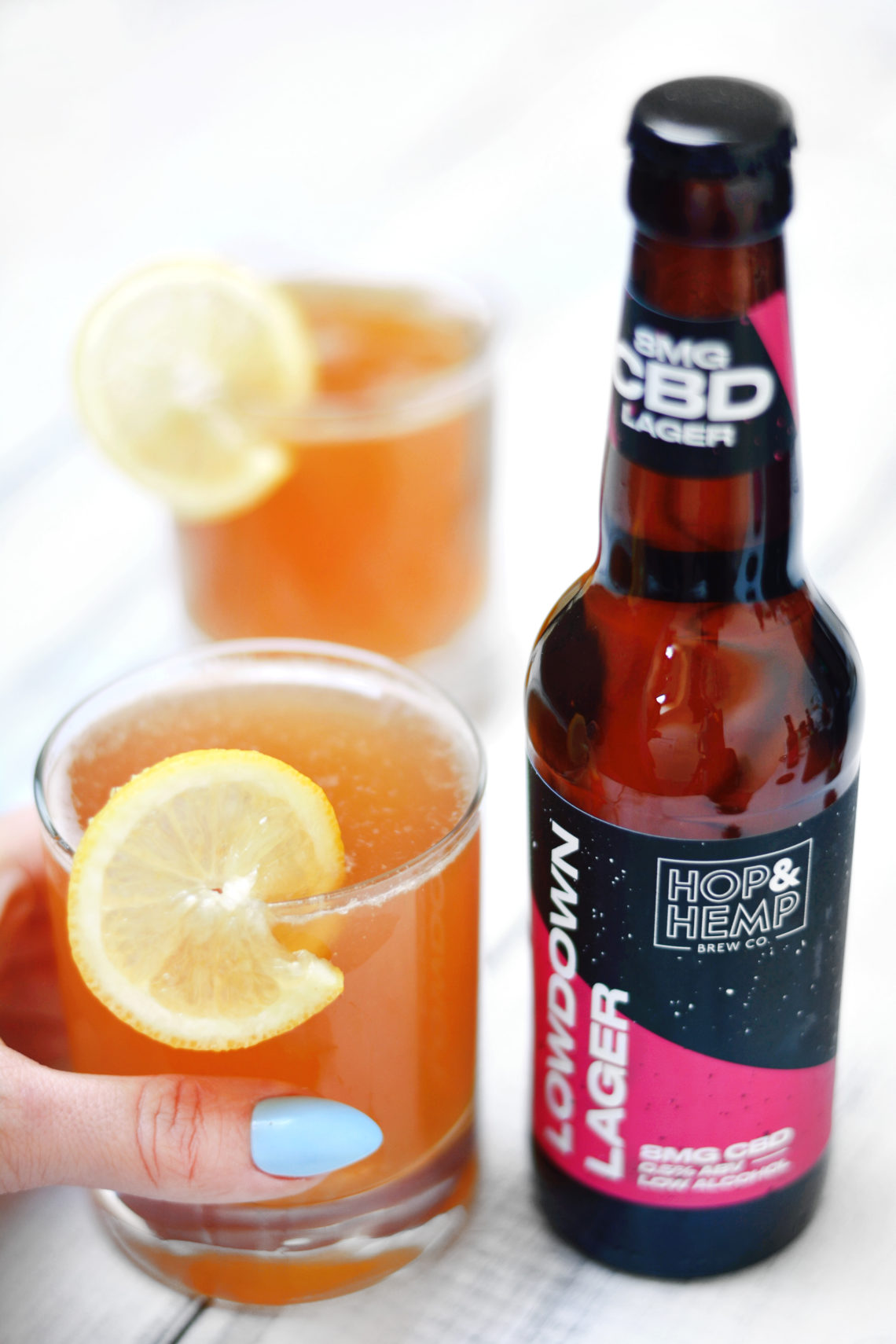 I have been lucky enough to receive a few bottles of Hop and Hemp’s amazing CBD Beer to sample. I’m not big on beer in general, but I have to admit that I was so impressed, I just had to share it with you all. Plus I got a little creative with it too and made a super revitalising CBD Shandy recipe. (Scroll down to the end of the post for that bad boy.)

DISCLAIMER: Please note that this is not a sponsored post. I have not received monetary payment for this post. I have been sent products from Hop & Hemp Brew Co. for personal use and to write a review if I wished. All opinions are my own and 100% honest.  If you buy anything from the Hop & Hemp Brew Co. website I will not receive any commission. If you’d like to know more, feel free to contact me.

Hop & Hemp Brew Co. stock a range of vegan, low alcohol (0.5% ABV) craft IPAs and lager that have been infused with organic full-spectrum CBD. So, you can still enjoy your fave bevvy with all the chill, fewer calories, and zero hangovers. It is worth noting, however, that these are not gluten-free but they are indeed vegan. There are 3 varieties in the Hop and Hemp range; Easy Times IPA, Double IPA, and Lowdown Lager. I received 2 each of Easy Times and Lowdown.

Now, I’m not huge on drinking alcohol, I usually only drink a few times a year and it’s always a watered-down 100% agave tequila. As a teen, however, I was keen on drinking a lot of Budweiser and yes, even Guinness. Oh, how times have changed! I decided to review each beer separately as they were both pretty different in flavour, so to find out what I thought, take a look below. 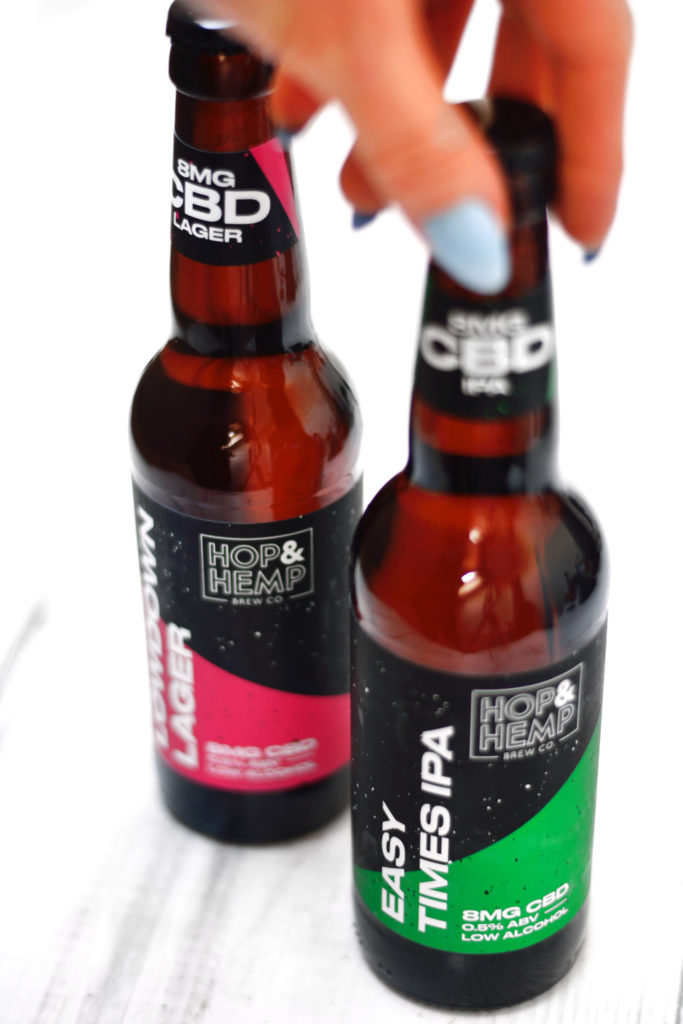 Did you know that hops and cannabis are actually related? In 2002, a group of UK and US plant and molecular biologists found that Humulus (hops) and Cannabis were very closely related and actually belonged in a single-family known as Cannabinaceae. Mind = blown. (You can read more about that here.)

Both plants actually exhibit similar aromatic and flavour notes all thanks to sharing the same ingredient – terpenes. Terpenes are aromatic organic compounds, similar to essential oils, that not only affect taste and scent but are known to hold various medical benefits. For example, the terpene linalool found in lavender is known for creating feelings of relaxation and ease.

When combined with CBD, and other phytocannabinoids, terpenes help to release the full potential of your CBD supplement, this is often referred to as the ‘entourage effect‘.  So it comes as no surprise to me that Hop and Hemp have decided to combine the two plants together to create the ultimate relaxation drink.

Each bottle comes with a small dose of 8mg, which is a great starting dosage for those that are new to CBD. However, as it’s quite small it means that you can indulge in a few bottles in one go. The higher the dose, the more relaxed you’re likely to feel. Small doses tend to be more energising but everyone experiences the effects of CBD differently. I’ve seen some sights try to explain dosages by looking at your bodyweight but this isn’t accurate and the only way to figure out what the best dosage is for you is by starting low and building it up to reach your sweet spot.

Think of CBD as a supplement, just like most vitamins stores in your body, it takes some time to build up the cannabinoid stores in your endocannabinoid system so although you may feel immediate relaxation effects, especially if you’re particularly sensitive to CBD, long term effects will start to become apparent anywhere between 1 to 3 months. 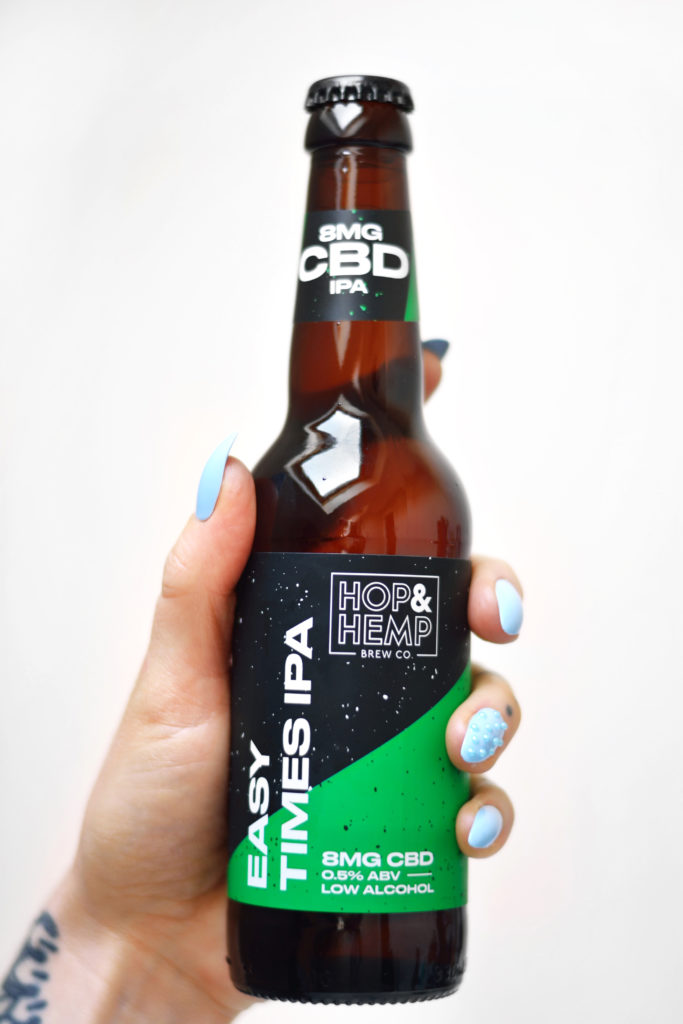 Easy Times IPA carries big fresh fruity aromas of grapefruit and pineapple and flavours of lemon, and yes, even biscuits. As mentioned above, each bottle has a low 8mg dose of full-spectrum CBD which on its own would actually help to boost your energy levels. After 2 or 3 bottles, however, you’ll definitely see more of a chill factor.

“A full-on IPA that delivers bags of fresh fruit flavours. Big aromas of grapefruit and lemonade are delivered from the triple addition of American hops. The palate doubles down on the fruitiness and brings in flavours of biscuit and honey. A classic IPA that’s big on flavour, without the alcohol.” – Hop & Hemp Brew Co.

I gotta come clean and let you all know that I am not a big IPA fan – I always find it way too bitter to tolerate and much prefer lager and cider. I legit could not taste lemon and biscuits, just pure bitterness, but as I said I am not too hot on ale whatsoever.

Thankfully I know someone who regularly guzzles craft IPAs regularly and they were really impressed with the flavour. We both agreed that there wasn’t a hint of plant-y CBD flavour. I’m guessing this is because both already possess similar terpenes and that bitter edge.

If you’re big on IPA but looking to cut down your alcohol consumption then Hop & Hemp’s Easy Times IPA will give you all the big flavours along with the same relaxing effects. 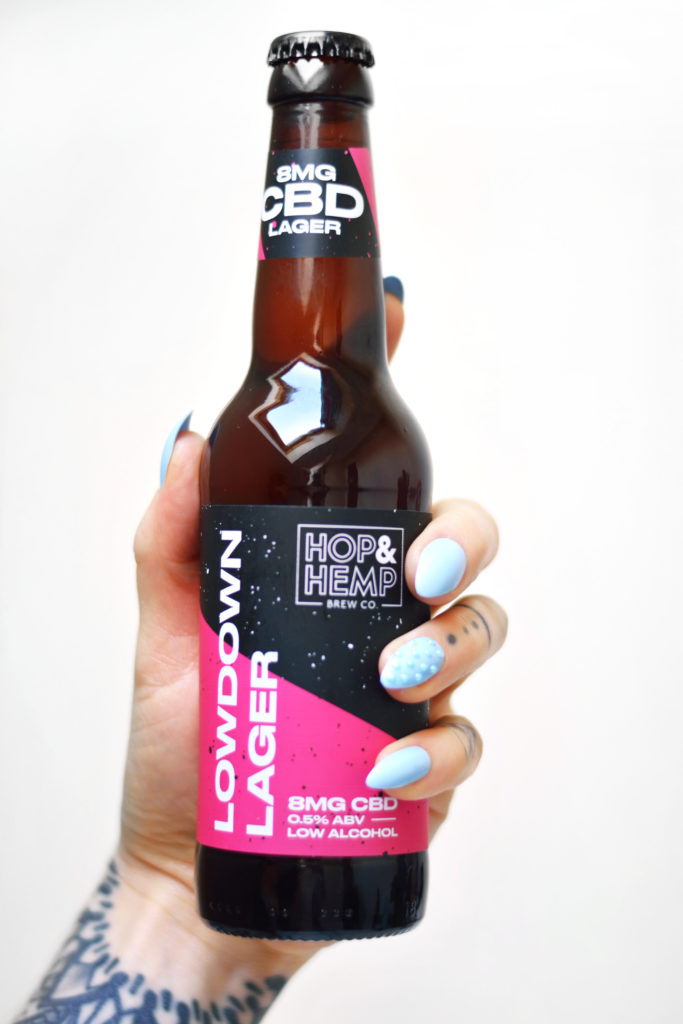 Described on the Hop & Hemp website, Lowdown Lager has a floral and spicy nose and a honey and citrus flavour. My wine tasting skills are probably better than my beer tasting skills but I feel like I got the descriptions for the Lowdown Lager more than the Easy Times IPA. There is definitely a nice spicy scent to it and upon your initial swig, you get a gorgeously crisp sweet citrus-like flavour followed by a mild bitterness.

This was hands down my favourite of the two and I’d happily guzzle a few bottles on the weekend along with some tasty snacks, obviously. If like me you aren’t a fan of stupidly bitter things then Hop & Hemp’s Lowdown Lager will be your best buddy.

I think that Hop & Hemp are a pretty innovative company – they’ve come up with a practically alcohol-free product that actually mimics the relaxing effects of alcohol without the hangover or even worse, the drunken antics that come along with it all. Flavour-wise it tastes identical to regular alcohol, although I’m not a massive alcohol drinker so please don’t take that as gospel.

After drinking about half a bottle I found the stress slowly melting away, it’s definitely effective and I can see how a few bottles later I’d probably be asleep on the couch laying a pool of my own drool. Either way, I’m impressed and I think I’ll be ordering a crate to chill out with on movie nights with a big bowl of popcorn, of course.

My only qualm is that these beers aren’t gluten-free and having an autoimmune disease I’m not supposed to really have any grains or gluten, having said that I’m now at a point where I can have the odd bit without getting too bad. To be honest I’ve had more bloating from a gluten-free Dominos than I have from these little golden bottles of joy.

The price is incredibly fair, coming in at the average price of a decent craft beer, but with that dose of CBD it makes it really cost-effective and a fun way to experiment with CBD. Sometimes you don’t want to neck a tincture or capsule, so for that reason alone I really enjoyed Hop & Hemp’s beers.

In the future, I’d love to see a range of ciders being released and possibly a gluten-free version too. Overall, I was mega impressed, especially as the bottles are delivered in biodegradable bubble wrap and the box and bottles are both recyclable. If you’re looking to get your chill on, minus the hangover then head on over to Hop & Hemp and treat yourself! 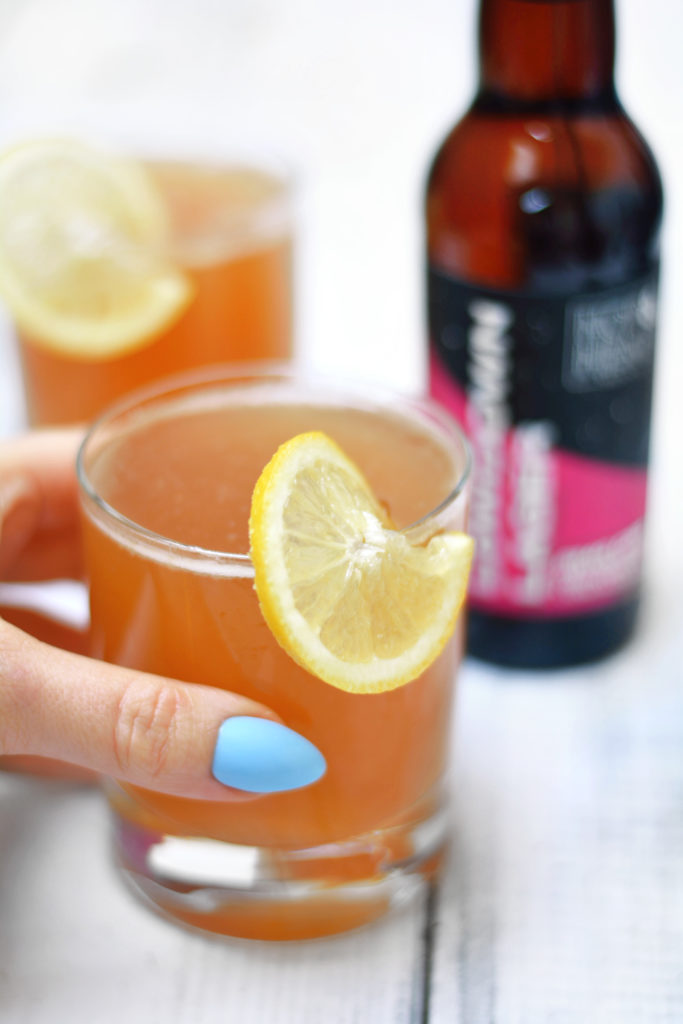 So, as all of Hop & Hemp’s beverages are practically alcohol-free I couldn’t think of anything better than a glass of refreshing Shandy. You know me though, I don’t do processed drinks so I’ve come up with a really awesome traditional lemonade recipe using fresh lemons, raw cane sugar, erythritol, and sparkling mineral water.

This is a totally no-cook recipe so you won’t have to put in all that effort standing over the hob to make a syrup. If you’re feeling a little adventurous you could even throw in a smashed lemongrass stick with the lemons, or replace the peel of one of the lemons with lime peel, to make something a little more aromatic.

I opted for the Lowdown Lager as the honey and citrus notes complement the lemonade perfectly, however, I think the Easy Times IPA would also work well and the sweetness of the lemonade should help to get rid of some of that overwhelming bitterness. This is a really refreshing drink and I think it’s something I’d love to whip up at summer.

The traditional British Shandy is usually made 1 part beer to 1 part lemonade, typically 7-UP, but you can do whatever you like.  I found the 1:1 ratio worked well but it’s definitely a personal preference. Anyway, enough gabbling here’s the recipe for my healthier shandy below…

For more delicious CBD recipes head on over to my dedicated CBD recipe section. Oh, and if you want to keep up to date with my deliciousness then sign up for my newsletter and I’ll love you forever – who am I kidding? I already do! 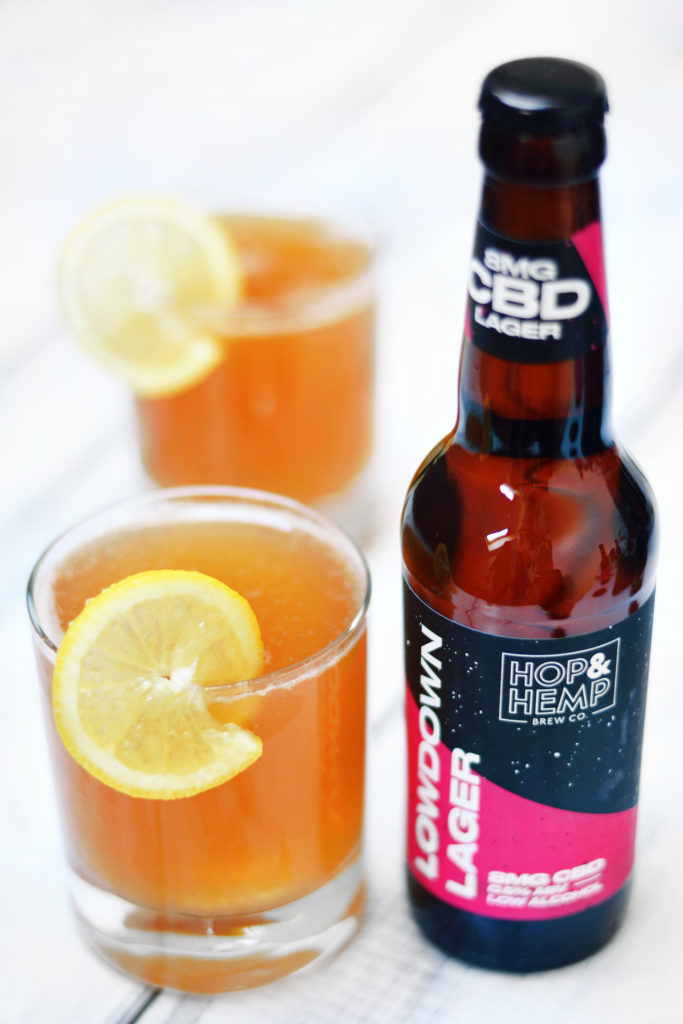 For each CBD Shandy:

Instructions
Notes
Although the recipe states it serves 2, there is enough lemonade for 6 servings if 1 litre of sparkling water is used.

If you would rather use agave nectar in replacement of the sugar, only use ⅔ of the weight. Agave is much sweeter!
3.5.3251

How Much Sleep Do You Really Need? (Via Primal Eye Magazine) 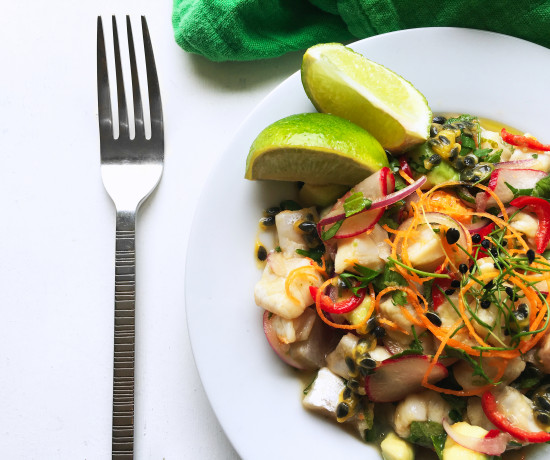