Coconut Ice is one of those all time childhood favourite sweets – for starters it’s pink and white and hence makes the most perfect addition to a princesses tea party – obviously. But one thing is for sure is that it is absolutely packed with a butt load of sugar… I mean you might as well offload a dump truck’s worth of icing sugar into your child’s mouth. Yes it really is that bad. The second problem is that it is usually made with condensed milk and so contains dairy which instantly makes it unavailable to vegans.

This chewy and succulent Raw Vegan Coconut Ice takes a fruity and healthy twist on the traditional recipe by using freeze dried pitaya and raspberry powders as well as sugar-free sweeteners.

Don’t worry, naturally I took it upon myself to create a Raw Vegan Coconut Ice which is a low and unprocessed sugar, dairy-free alternative to the real thing. Do not fear however, I have not skimped on taste nor appearance. 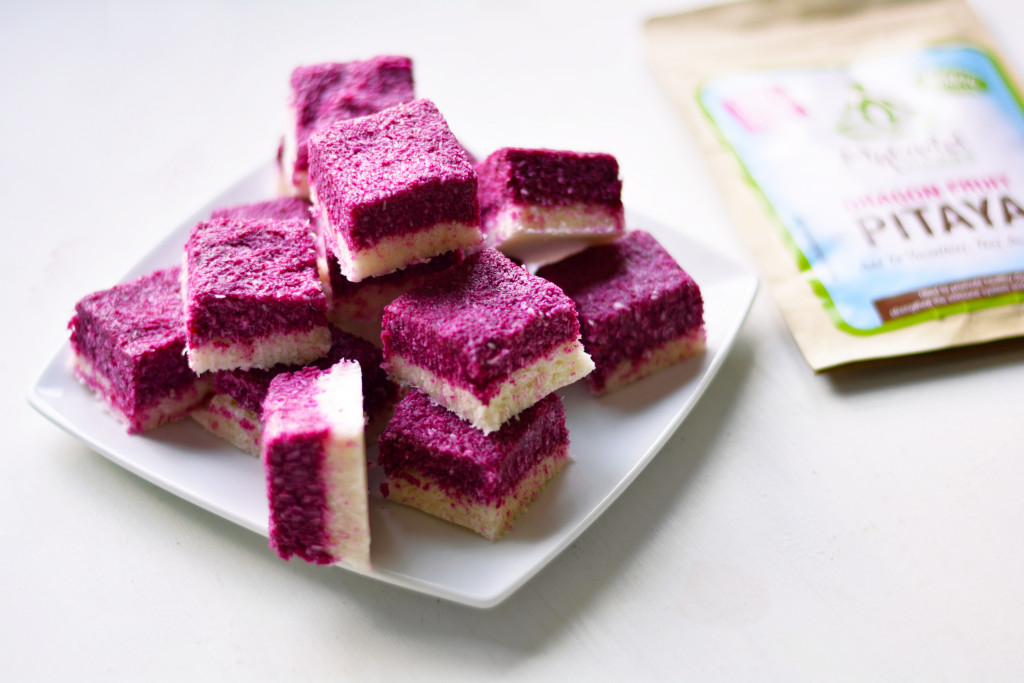 After a little research I found that both erythritol and xylitol fit the bill for my white sugar alternative – they’re both sugar alcohols derived from natural, plant-based sources – not to be confused with artificial sweeteners, which are… well… artificial. Erythritol is derived from the fermented sugars found in corn husks and unlike other sugar alcohols and natural sugars it has zero calories and doesn’t impact your blood sugar. It’s also easily digested and is one of the very few sweeteners that won’t irritate your bowel. Xylitol is a great sugar alternative derived from the birch tree. It’s pretty nifty stuff as the bacteria in your mouth likes to feed on sugar and reproduce, causing tooth decay, however xylitol can’t be digested by the bacteria in your mouth and so acid production stops and plaque breaks away from the surface of your teeth. Some people can experience side effects when consuming xylitol such as bloating, diarrhea, and well… wind. If you’re particularly sensitive in this area then replace the xylitol with more erythritol to err on the side of caution.

To make a dairy-free condensed milk I used organic coconut milk powder instead of milk powder derived from cow’s milk, and also a mixture of coconut oil and cacao butter instead of butter. If you do still include grass-fed butter in your diet then by all means replace the two fats with 1/4 cup of butter for a more authentic taste. The condensed milk literally takes a few seconds to whizz up and I’ve included double quantities in my recipe so that you’ll have a jar left over to use in any recipe that may call for it! 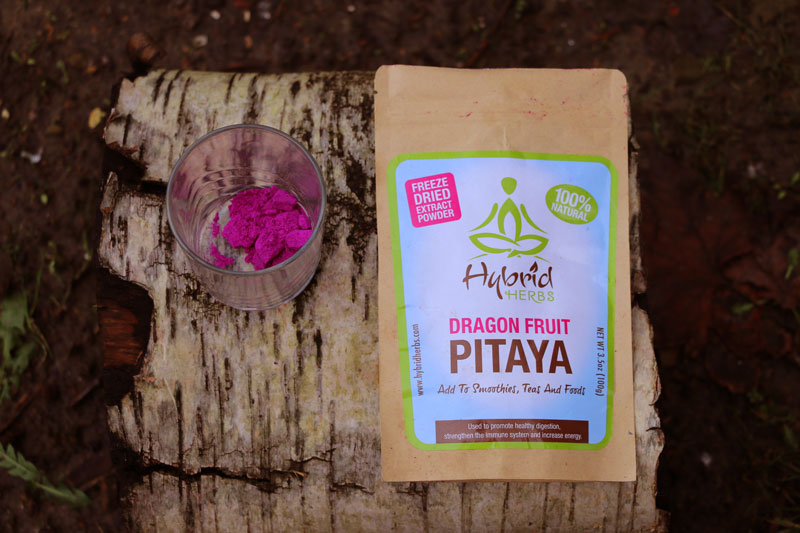 As an adult a combination of simply coconut and sugar doesn’t feel all that appealing anymore, if anything it sounds downright bland, so I opted for a tangy raspberry and pitaya (dragon fruit) pink layer just to cut through the overt sweetness of the erythritol and xylitol. Lucky for me the friendly folk over at Hybrid Herbs rather kindly sent out some of their freeze dried Pitaya Powder to have a play with and the results were stunning! The pitaya powder oozes this awesome, funky pink-magenta like colour with a burst of tropical flavour that’s akin to melon or pear.

For those of you who are like “Pitaya what?!” you’ll probably be more familiar with it as the Dragon Fruit. Dragon Fruit over here only ever has a pink outer with a white fleshy centre, flecked with tiny black seeds. However, Dragon Fruit in Asia typically has a bright pink, Instagram worthy, fleshy interior that is to die for. Pitaya may look pretty but it also packs a super nutritional punch as well as a tasty one – it’s high in antioxidants and dietary fibre but it also contains high levels of vitamins C, B1-B3, calcium, iron, phosphorus, magnesium, and even Omega-3 fatty acids! Dragon Fruit is also low in calories (a whole fruit contains just 60 calories!), so it ties in well with the theme of this recipe altogether.

This is far more moist than any other coconut ice I ever had as a kid and super flavoursome too, so much so in fact that it is dangerously more-ish… Those of you who followed my Instastories around Christmas may remember me taunting you with many a juicy square of this stuff at a time! Sorry! (Not sorry!)

The Hybrid Herbs Pitaya Powder retails at £19.99 for a 56g pouch (about 56 servings) but is currently on sale for £14.99 so grab yourself a bargain whilst you still can! 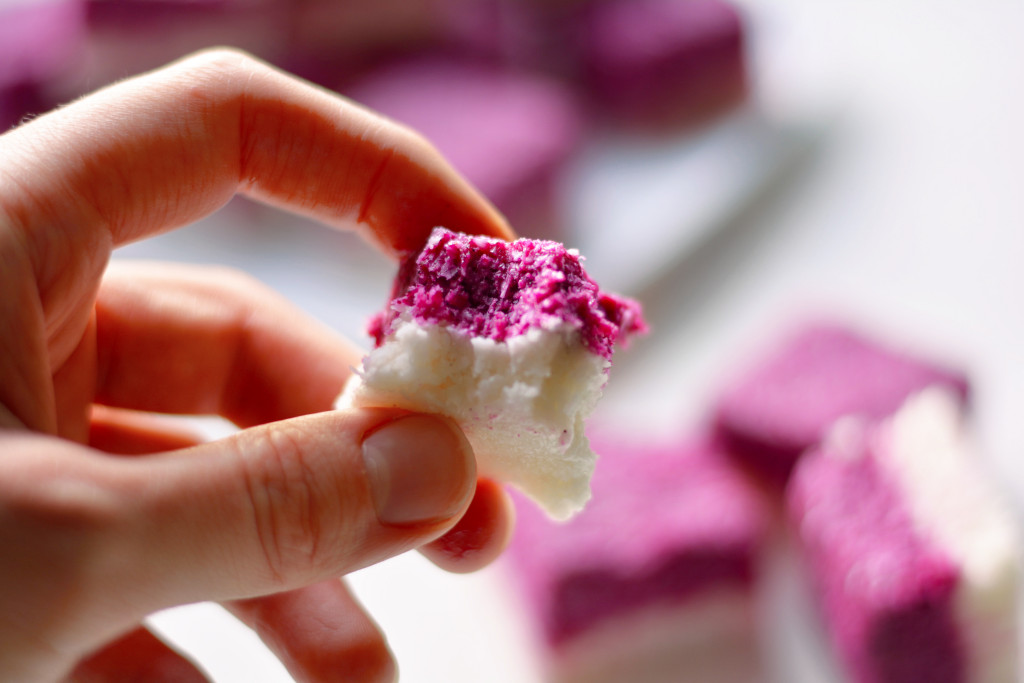 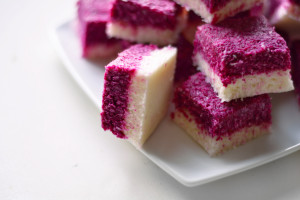 For the white coconut ice:

For the pink coconut ice:

Instructions
Notes
Please note that this recipe requires you to make a batch of condensed milk. The recipe will make around 1050g, enough to fill two 500ml mason jars. Only 400g is required to make the full coconut ice recipe so you may halve the quantities if you wish.

*If you are not vegan you can use ¼ cup butter in replacement of the coconut oil and cacao butter.
** Prep time is 20 minutes plus an overnight setting time. 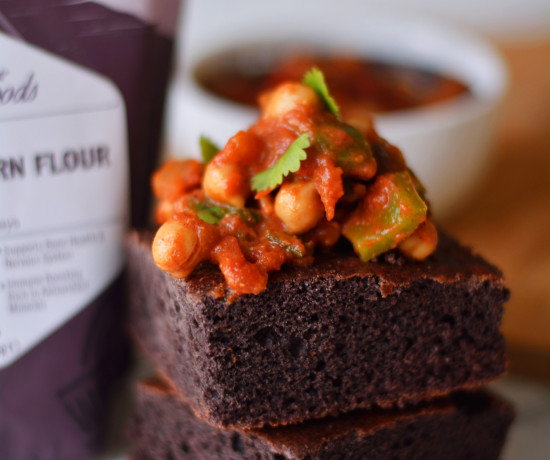 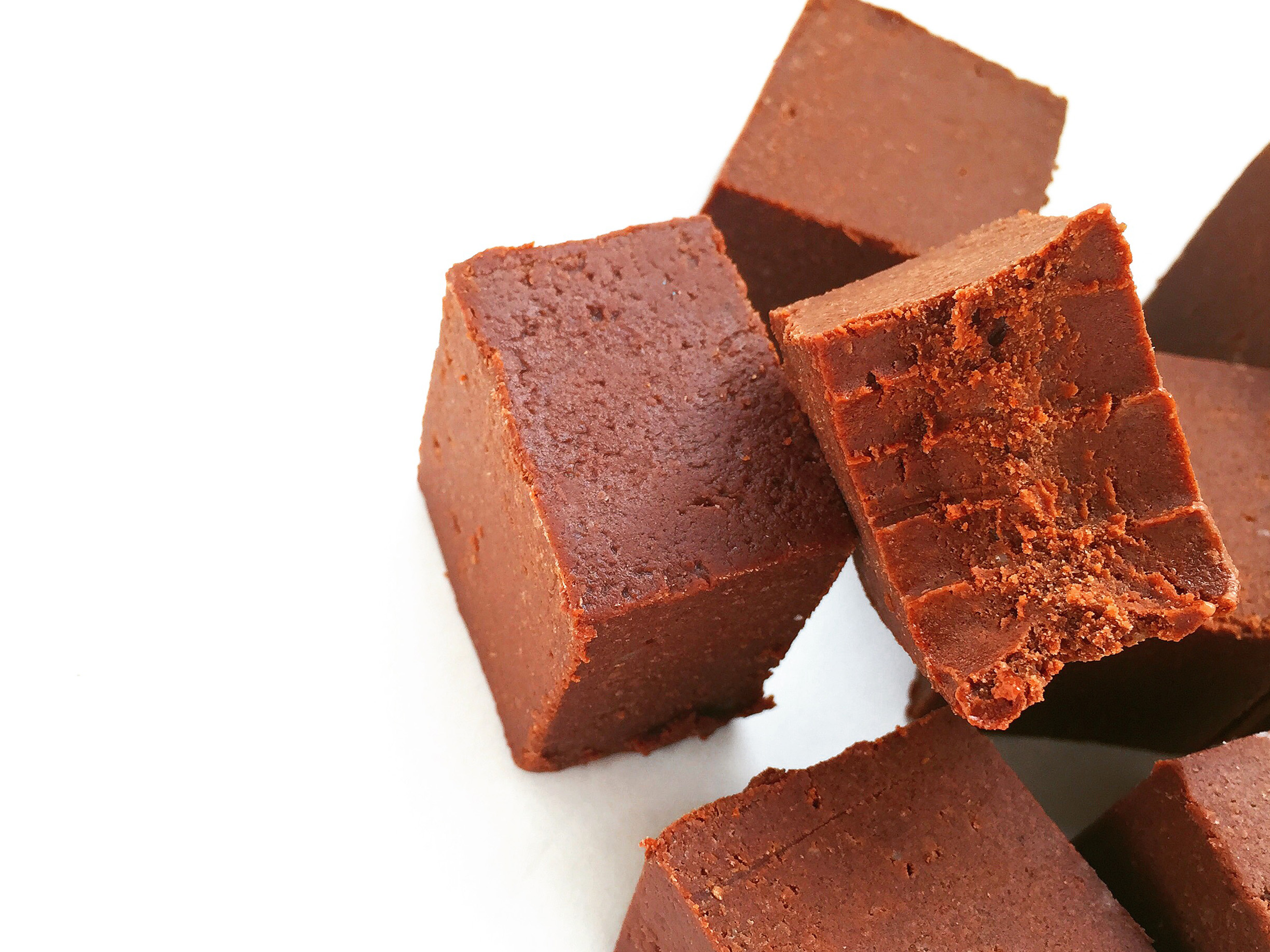 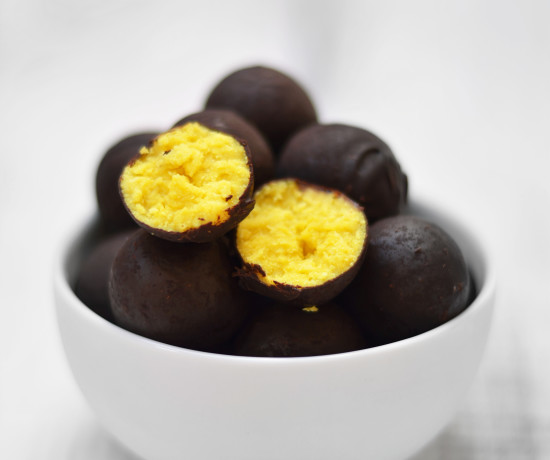